Follow us on
Home  /  Publications  /  Molecular mechanisms underlying the role of microRNAs in the chemoresistance of pancreatic cancer
posted in Publications, Publications of the AIRC-Start Up Unit
author Cancer Pharmacology Lab

Pancreatic ductal adenocarcinoma (PDAC) is an extremely severe disease where the mortality and incidence rates are almost identical. This is mainly due to late diagnosis and limited response to current treatments. The tumor macroenvironment/microenvironment have been frequently reported as the major contributors to chemoresistance in PDAC, preventing the drugs from reaching their intended site of action (i.e., the malignant duct cells). However, the recent discovery of microRNAs (miRNAs) has provided new directions for research on mechanisms underlying response to chemotherapy.

Due to their tissue-/disease-specific expression and high stability in tissues and biofluids, miRNAs represent new promising diagnostic and prognostic/predictive biomarkers and therapeutic targets. Furthermore, several studies have documented that selected miRNAs, such as miR-21 and miR-34a, may influence response to chemotherapy in several tumor types, including PDAC. In this review, we summarize the current knowledge on the role of miRNAs in PDAC and recent advances in understanding their role in chemoresistance through multiple molecular mechanisms. 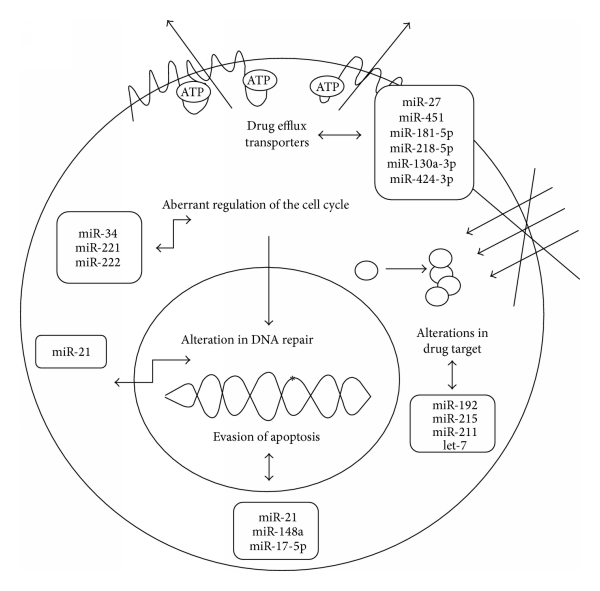 Legend: MicroRNA and their involvement in anticancer drug resistance. Drug resistance can occur at many levels, including drug efflux, alterations in drug target, DNA repair, cell cycle regulation, and evasion of apoptosis. Some selected miRNAs which have been demonstrated to alter these mechanisms are shown in this figure.

We use cookies to ensure that we give you the best experience on our website. If you continue to use this site we will assume that you are happy with it.Ok